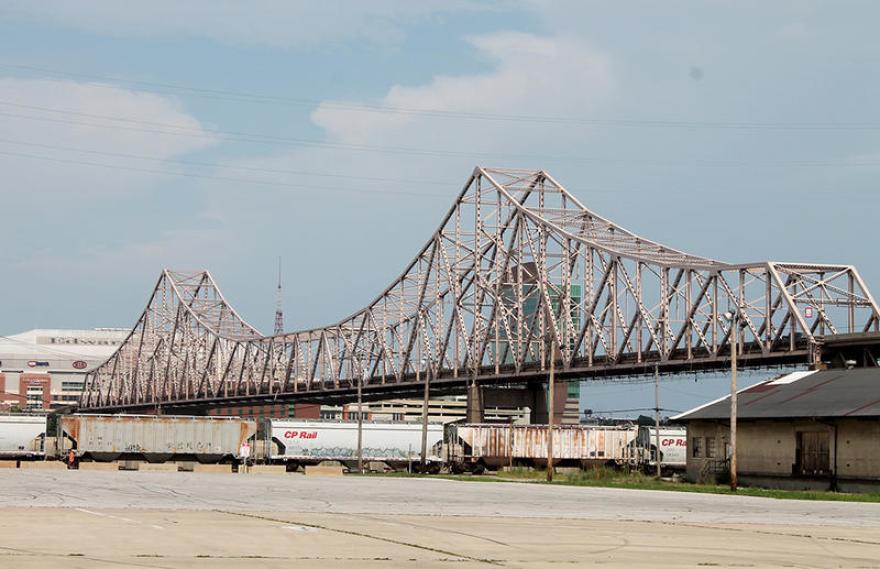 God has blessed me with two amazing sisters-in-law. They are some of my favorite people. They both have one major flaw; they tend to get offered jobs in other states that require me to cross several bridges.

I’m not too fond of heights in general, but I really do not enjoy driving over bridges. It is a whole lot of trust to believe that those engineers knew what they were doing and the materials can stand the test of time. I blame part of this fear on having brothers who would jump and down on any bridges we crossed as kids and my sixth-grade science teacher, who showed us videos of bridges collapsing—crappy teacher move.

Plus, we sang about London Bridge Falling Down as kids. I mean. Really it’s amazing anyone drives over bridges or still builds bridges at all. It’s all because of those pesky rivers and other bodies of water. I’m sure God knew what he was doing when he created the Mississippi River, Ohio River, Missouri River, Tennessee River, and Cumberland River. I only wish they were all a little smaller and not in the direct path to my family.

After I turned in my classroom keys, returned my computer, and closed out that chapter of my journey, I hit the road for Kansas. It was windy and cloudy for most of the drive. It would rain for about ten minutes at a time and then stop. Unfortunately, that ten minutes would start right when I was about to cross a bridge. Not the little bridges that are over tiny roads.

Nope. The River Bridges. Traffic would slow down as soon as my tires hit the change from road to the bridge. We would creep across a bridge at a blazing 10MPH while suspended over some vast river with rain pouring down. Every. Time. I eventually made it safely to Kansas and had a lazy, wonderful long weekend with my brother and sister-in-law and their puppies.

On the drive home, I had cloudy skies but no rain for the first two bridges. Then I hit St. Louis. My GPS was telling me I had to stay in the right lane. I usually cross all the way over to make sure that I am in the correct right lane. Then I thought about how silly it was when the road veers, and I could have stayed in the lane I was in.

My stubborn strike kicked in, and I thought I am not moving over. I was in the third lane from the right. I had two more lanes to my left. I was so confident that my lane would veer right that I stayed even when I had a feeling I needed to get over one more lane.

Why didn’t I move over?

Because I didn’t want to end up on the outside lane of the bridge. That bridge is huge. That river is huge. Every time I cross it, I notice all of the other bridges and think, “at least I am on this nice big bridge and not one of those sketchy small old ones.” See, that big fancy bridge is the one I take. The ones in the background are the ones I am thankful I avoid.

Then the light turns green. My GPS is telling me to turn left, which would have landed me in the Mississippi River. I see a sign for I-70 and head that way. I brace myself for having to cross the big bridge twice. In my mind, I was backtracking and doing a U-turn. Then two realities hit me at once.

My Australian Siri GPS was useless. He was still trying to get across the river without a bridge.

I was heading for the sketchy small old bridge, and there was no way to stop it.

I threw a gummy worm in my mouth, gripped the steering wheel, and started to cross the wrong bridge. This wasn’t the bridge I was supposed to cross. The nice big scary one was. I had no choice but to move forward at this point. I did briefly consider rolling down my windows and throwing my Subaru Impreza in reverse and just slowly backing away while yelling, “SO SORRY! This is the wrong bridge for me! What can I say? I’m a Tennessee driver and a natural blonde. Thanks for letting me off, bye!” But that felt like the fastest way to end up in a massive pile-up on the wrong bridge.

So I kept moving forward.

Then the blue minivan put its brake lights on in front of me. They were doing construction on the bridge, and the speed limit dropped 15 MPH instead of 70 MPH. CONSTRUCTION. Meaning they were taking pieces of this bridge off WHILE I WAS ON IT.

I crept over the Mississippi for three minutes, and then I finally hit the interstate. I released my chokehold on Izzie’s steering wheel and ate some goldfish as a reward. My GPS rerouted, and I somehow was on the road I needed to be on. No backtracking was needed. I drove for a little while and started thinking about I ended up crossing the wrong bridge. I then started talking to God about it, and his response was, “Well, that was dramatic.” Then this lesson formed in my mind and heart.

I crossed the wrong bridge because I decided I needed to stay in the wrong lane.

I was letting fear drive my decisions. When I let fear drive my decisions, instead of praying and being led by the Holy Spirit, I tend to end up on the wrong bridge. The river doesn’t go away. The bridge doesn’t go away. The journey gets harder. In this case, I still ended up where I needed to be and headed in the right direction, but my actions and choices to ignore all the warning signals lead to a much more dramatic experience across the river.

My church had just wrapped up a series on Joshua and the Israelites crossing the Jordan River came to my mind. In chapter 3, they are facing the Jordan River, and God gave them directions on how to cross it. This is the same group of people who had crossed the Red Sea. Moses held out his hand the waters parted. Pretty awesome. This time, the Israelites were told by God to carry the Ark of the Covenant into the Jordan River. Once they moved, the waters parted. They had to move before the miracle and believe it was coming. Then they had to stay while the people crossed—no turning back.

I felt a lot like the Israelites on that drive home. I am currently unemployed and don’t know which direction to go next. Joshua told the people to wait until they saw the Ark of the Covenant and the priests moving and then to follow because they didn’t know which way to go. They had never been there before.

The Israelites had to have faith in their leader Joshua. Joshua had to have in God. God didn’t ask for their opinion on the best way to cross the Jordan; he asked for their obedience and trust, which is so hard actually to live out.

I don’t know about you, but I like my miracles to come before a major act of faith is needed.

Being in the position where you need a miracle usually means I am up against some impossible odds, which isn’t fun. Looking back on the miracle is pretty amazing, but the journey in the middle is hard. It’s hard even though I have the Bible and the Holy Spirit to guide and equip me for the journey.

See, I really wanted the river to go away and the bridges not to be needed. I wanted easy. I’m sure there were some Israelites who would have rather taken a different route that didn’t put them in the path of Jericho.

That is not how God works. His plans are so much greater than anything I can see or imagine. See, the Mississippi River contains 25% of all North American fish species, which feed people and animals alike, and it was apparently where water skiing was invented, according to this website. This river has sustained life in America and made it more fun. And I want it wiped out because I don’t do heights. I’m sure God laughed at that one. God knew what he was doing when he created it, and he knew what he was doing when he placed other rivers in my life.

He made a way to cross the river.

He actually made multiple ways. I’m sure that I will find myself on the wrong bridge again someday. I’m thankful that even in my failing, there is grace and goldfish there too.