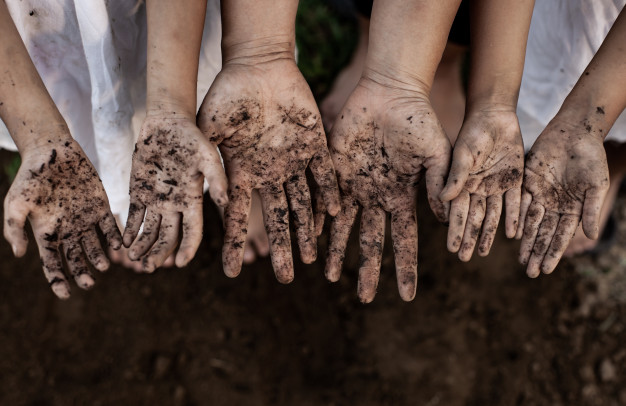 I watched her chew on the remains of the pink starburst.

I watched as she pulled it out of her mouth and rolled it between her fingers before chewing on it some more.

I tried to focus on telling the story of God speaking to Elijah from 1 Kings 19. I was at the part where Elijah was fed up, felt alone and forgotten, and was asking God to end it all. God told him to go out and stand before the mountain because the Lord was about to pass by.

I then asked my little preschool audience to show me how they would feel if God was about to pass by them. Preschoolers love to make faces and they love starburst candy, so they eagerly  showed me faces ranging from scared or surprised to confused. The room filled with giggles as I complimented their faces and tried to reenact them.

That’s how the pink starburst ended up being decimated by my little friend. She spent the rest of the story eating that one starburst.

I kept a mental note of everything she touched so I could clean it later and sent a prayer of thanks for my pastors for letting me use the sanctuary…and for them to stay outside until preschool left so they wouldn’t witness this sticky finger touching everything.

When he heard it, Elijah knew it was God and he covered his head and went to the mouth of the cave.

She finished the starburst and stared at me expectantly. Hands covered in pink goo and eyes wide with wonder at what God would say to Elijah.

God asked him why he was there.

Then God gave him a game plan and told him that he was not the only prophet left. God has 7,000 others who had not bowed down to the idol Baal.

I was starting to lose my preschoolers at this point because it had been a while since the last starburst was given out and 7,000 just doesn’t make sense when you don’t even have one starburst.

I wrapped up my lesson and asked if anyone wanted to pray with me. A hand covered in gooey pink starburst shot into the air.

Then, I reached my hand out for her to take it. I know the second she reached me because I heard our hands met with the unmistakable sound of squish between our hands. I held on and had her repeat after me as I prayed.

She accepted Jesus into her heart that night.

I could have had her wash her hands first or look at one of my teen helpers to read my mind and get a wipe before I grabbed her hand.

But I thought of my own unclean hands.

I thought of the pride, lies, greed, and all the other sins that covered my own hands. I thought of Jesus reaching out knowing why and how they got dirty…and choosing to grab me anyways.

I thought of his love and how that is the only way I got clean. No soap or good deeds could have taken away the shame and brokenness.

I saw the hope, longing, and  joy in her eyes when she raised her hand. She was young but Jesus said let the little children come. Let them experience the love of a savior. Then walk with them through discipleship to make sure they have a complete understanding of salvation.

So many adults get salvation wrong. We want to get clean before coming to the King. We want to know the right answers. We search for God in the wind, earthquakes, fire, and yell over the whisper.

Jesus didn’t ask me or you to get clean before he can remove our  heart of stone and give us one flesh. He just asked us to come with sticky hands and a broken heart trusting that His love, death, and resurrection was enough for us.

We no longer have to carry the label unclean. We get to walk in freedom, seeking the voice of God, and following his truth into a messy world.

And as soon as the preschoolers left, my teen volunteers (who really could read my mind) were ready with wipes to clean my hands and every surface that was now sticky. Because once we pray and accept Jesus, we get to be a community who helps keep each other clean.